For the last seven years, Esther and I have watched our writing career lift off the ground.  We’re under solicited submission to Baen, we’ve got a well-loved urban fantasy series, we’ve got stories in anthologies from a whole host of different publishers.  We’ve appeared as pros and dealers at WorldCon, World Fantasy, and Westercon in addition to our regional conventions.  Every time we release something, we add people to our audience, and it’s a wonderful feeling.

See, in 2011, we weren’t known by anyone.  Heck, at the beginning of 2011 we weren’t even writers.  We were just a pair of working schlubs, trying to make the best of what we had.

But then Esther’s friend talked her into entering the writing competition hosted by Spocon. Which she won. With a little story about summoners, and rune magic, and giant demon-beasts from other realms invading earth. And a little demonic dude named Cythymau.  If you want to read the first piece of Gift of Grace literature ever, you’d have to pick up the 2011 League of Extraordinary Writers anthology, put out by Spocon.

This…catapulted us forward in ways we never imagined. 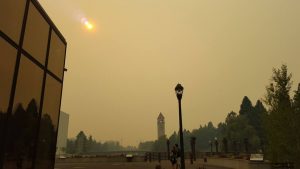 Spocon, in the meantime, rose to great heights.  In 2015, Spocon hosted WorldCon in the deep smoke of the worst season of forest fires this state has had to date.  It was a monumental achievement for a convention as small as Spocon was, but it took its toll.

In 2016, the staff fractured. I can’t blame them; they’d absolutely burned themselves out putting together WorldCon, and they were done. No Spocon was held. The Doubletree Inn remained silent.

In 2017, two remnants of the staff attempted to resurrect Spocon in two formats; one similar to the original Spocon, and the new Fan Nexus con.

2017 turned out to be a rebuilding year for Spokane nerds. Spocon was riddled by sexual assault allegations, followed by a very poor handling of those allegations by the then-president of the convention. The board removed him as president and took the appropriate steps, but the public relations damage had been done.  The halls of the Doubletree were very quiet last year, and in a row of tables devoted to authors Esther and I alone had a table with books on it.

We didn’t go to Fan Nexus. The handful of people who did go tell me it was amazing, but it failed to draw an appropriately-sized crowd and is not returning due to, I suspect, lack of funds.

Spocon, however, will be coming back with a vengeance.

We may not make much profit on Spocon. It’s not going to be a convention where we sell out of books – most of the people there have already read what we have (the novel under submission to Baen has put something of a kink in our production pipeline).

But this is fandom. And the financial standpoint is not the only standpoint. 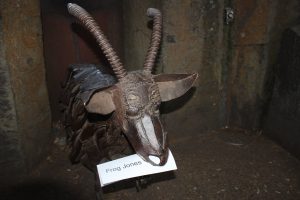 In a very real way, Spocon is home. All of our characters were born there. Our entire world was created there. It’s where every wonderful thing that has happened to us since began, and it is the cause.

I’ve made this post because there’s been some questioning.  Authors who aren’t going to Spocon, and who shall remain nameless, have asked things along the lines of “Isn’t that convention basically dead on its feet?” or “Do you really expect an audience there?”

To these questions, I smile. I shake my head. And I simply tell them that it’s a con worth going to.

Becuase here’s the thing:  I know Spokane nerds.  Hell, I grew up a Spokane nerd.  And I can say, definitively, that Spokane nerds are hardcore. They don’t take their geekery lightly.

Yes, 2016’s lack of a convention was a body-blow to Spocon.  It’s going to take a couple of years for it to be resurrected to its former glory.  But that resurrection is, I believe, coming. And since it’s our home con, I want to be there to help make it happen.

So hell yes, doubters. We are going to be at Spocon.  And we are going to have a baller time at it. Because, for us–we’re going home.

Spocon is August 10-12 at the Doubletree Inn in Spokane, Washington.