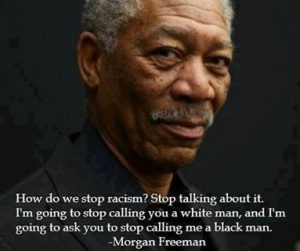 Some background, first:  Growing up, everyone around me was white like me.

That statement is not literally true.  The small, rural town of Colfax, Washington actually contained Asians, Hispanics, African-Americans, Native Americans, Indians, and Arabs.  Not in large concentrations, but they were there.  Hell, they were within one grade level of me at school.

But I did not realize it.  Understand something:  as a child, if someone had shown me the following picture, I would not have pointed out any significant differences between the people that weren’t gender, age, and maybe that one guy was really bald: 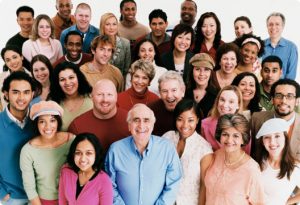 You see, the idea of “diversity” had never hit the little town of Colfax.  I didn’t hear the concept until I got into college.  Oh, I’d heard about black people and such, but throughout most of my grade school career through junior high I didn’t put two and two together on that one. 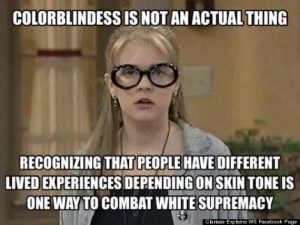 An example:  There was a girl in our graduating class (a class, by the way, of only 64 kids) named Alefiya Hakim.  I knew her skin was a little darker than the rest of us, but it never occurred to me that she was a different race.  We also had a Kiran Dhillon; I only figured out she was a different race when she came to a formal event dressed in a traditional Indian gown, which was gorgeous and awesome.

The point here was this:  I didn’t really see dividing lines.  I was incapable of forming the idea that skin color somehow affected an artificial division between people.  Everyone was just kinda…like me.  As an adult, I understand the concept, but it strikes me as a pretty silly and superficial way to judge. 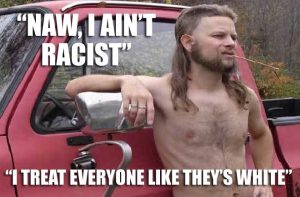 Now, when Esther and I started getting into writing, we went with “write what you know” as our slogan.  We set out to make the completion of a good novel as easy as possible on us, which is why we set the initial books of the Gift of Grace series in Spokane; that’s where we were living.  Now, Spokane is a pretty white city to begin with, and we were white people living in a white city.  So all out characters pretty much ended up being white.  If I had to write it again, I’d probably do it exactly the same way.  Those stories work the way they are.  (Granted, Falling From Grace puts into motion some events that will probably change all that, but that’s later).

But I also look at the body of short stories, and I realize something:  I’ve been pretty lazy on this front.  I have yet to publish a story, long form or short, than involves any significant non-white character.  And that’s just flat-out racist of me.  It was unconsciously racist, but it was absolutely racist.

So, here’s the thing:  if I continue down this path, I can no longer claim that unconscious shield.  I’m now conscious of the problem, and having become conscious of the problem I have to actively work towards the solution or just be OK being racist, which I’m not.  That means I need to write in, at least to some of my work, characters that are not white.

And so I look out at how to do that, and I have come to a terrifying conclusion, which is this:

I am more likely to be ostracized as a racist if I include multiracial characters than if I do not.

Now, I’m a white, educated, heterosexual, monogamous male.  When I was rolling my character sheet up at birth, I basically checked the “privileged” box all the way down, powergaming the system for all it was worth.  My parents were lower-middle-class, so I guess I didn’t grow up wealthy.  That’s about the only difference.  So I know that I’m the most likely target for anyone who wants to point the finger at me and call me racist/sexist/homophobe/whatever.  And I want to avoid that, though I know I’m exposing myself to it simply by writing this post.

Here’s the thing:  as someone who writes stories containing all-white casts, I’ve never been specifically called out for it.  I am calling myself out for it in this post.  But mostly, I fade into the woodwork of the vast majority of genre fiction, which also contains a whole bunch of white people and not much else.  If I continue to write all-white, I’ll feel bad about it personally.  But I won’t take a lot of shit for it, because I’ll just be going along with the flock. 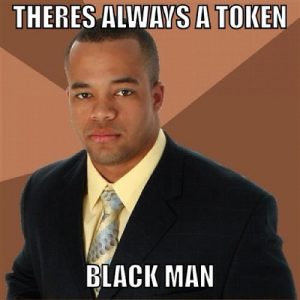 If, on the other hand, I try to include, say, a black character in a role, someone is going to give me crap about it.  I’m using African-American as an example, here, but these problems are pretty systemic.  The first one, and most obvious, is that I will be consciously building the story to include these characters to avoid being racist.  This, of course, is a trope already, and one I am very conscious of.

That said, I don’t think that’s my problem.  If the story works, and the character doesn’t hang there like a vestigial appendage, then I can avoid a character falling into the “token black guy” trope.  That’s simply a matter of good writing, and it’s not the real problem I have.  I simply want to acknowledge that I’m aware, and that if I’m writing something like this I will build the story around the character in order to avoid the Token issue.

Option 1:  I treat skin tone for the cosmetic difference that it is.

Remember, I come from a background where I don’t think about anyone as being other.  Skin tone seems a stupid cultural dividing line, and if I were to write an African-American character, my natural inclination would be to build a fully-rounded character with a series of personal motivations and behaviors that have little to do with skin tone.  The fact of race would be incidental to their existence as a person. 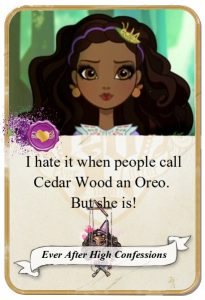 Of course, this is going to run me into some problems.  I will have written a character that could, in the parlance of our times, be referred to as an “Oreo.”  I will not have specifically added behaviors or motivations designed to enhance the perception of the characters as being black, and so they are going to come off as black on the outside, white on the inside.

In other words, I’m going to be a racist, because I’ve included a character and gotten it wrong.  I’ve ignored African-American heritage and culture, and I’ve completely minimized the intrinsic value that being African-American has.

I’ll be a racist because I’ve totally gotten the race wrong, which is insulting to members of that race.

So, I can’t do it this way.  I have to research the culture and include some motivations and behaviors that highlight the fact that the character is, in fact, African-American.  Right?

Option 2:  I include at least some portion of the racial culture in the character.

Because here’s the thing:  there is no part of a minority’s culture that one can include without being thought of as racist by at least a portion of the population. 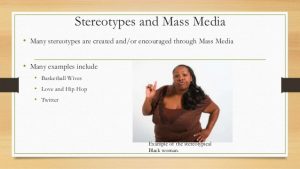 Some African-Americans speak in a “street” dialect of some form.  True of some whites and some Hispanics, as well.  Some don’t.  Do I include that kind of dialect for this character?  Not without being called a racist, I don’t.  Hell, if I wrote a white character that talked street, I’d be less likely to get tagged as a racist than a black one.

Does my character like hip-hop?  Once again, I know a lot of people from many races that do.  But if I include it, am I including a cultural element, or am I reinforcing a racist stereotype?  Is there, in fact, a cultural element unique to any race that cannot be painted as stereotyping the character?

I submit to you that there are things that I, as a white person love that I still can’t write into the hands of a black person without coming off as racist.  To wit: 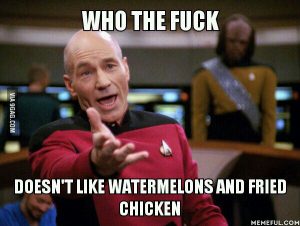 And I have no idea if/how to walk the line in between.

So I’m back at the beginning, for now.  I feel like more of a racist for not writing any diversity into my stories.  But I’m afraid of doing so, because I know when I do that I’ll be called out for being racist.  The very thing I attempt to try to get past my problem will become a much larger problem.

So, I’m throwing it out there.  Other authors, or frankly anyone who’s got an idea on this one, please let me know.  How in the hell can I go about becoming less racist without appearing to become more racist?  Because I think there’s a real problem here, and I want to write past it.

Thanks for your time, and thank you in advance for the advice I’m sure to get.