I want to take a moment to honor Sergeant Greg Moore of the Couer d’Alene Police Department.

I didn’t know Sgt. Moore well.  He wasn’t a buddy.  He was a guy I met a couple of times in the course of business.  He seemed nice, and I never had to file a suppression motion on anything he did.  That doesn’t seem like much, but frankly there’s no higher praise I can give a cop than that.  He did his job well, and he gave his life in the line.  A prayer to the deity of your choice for his family would not be amiss.

I’m a criminal defense attorney.  When giving legal advice, I tell people that they should never speak to the police, always assert all of their rights, and ask for an attorney immediately.  That’s just good legal advice.  It doesn’t mean cops are evil for doing what they do; it’s just that you’ve got certain rights and it’s my job to encourage you to, you know, use them.

But that’s different from what I’ve seen lately. Lately, the internet has taken and issue and, once again, polarized it into its two most moronic extremes.  This seems to be a function of our times, where the most extreme assholes are the loudest and most pithy, and therefore get the most out of our rapidly-shrinking attention span.

On the one hand, you’ve got this:

But wait, I hear you say.  You said that this had been taken to an extreme.  Wasn’t that a legitimate complaint?

And that brings us to incidents where people get way out of line over crap.  Let’s start with Eric Garner.

Here’s the video of Eric Garner being killed by some cops:

Now, the young man recording the video is talking about what’s happening, but it doesn’t line up with the history.  Mr. Garner was committing a relatively minor offense; he was illegally selling cigarettes.  The cops approach him and try to talk to him about it, and he loses his shit.  He is massive, he is angry, and the cops take him to the ground.

Now, he’s a big fat bastard of a man, and he can’t breathe when he’s on his stomach, so he dies.  That’s sad.  And the chokehold is definitely wrong.  The cops could have done something different, something better here.  It was not perfect, but neither can I blame the cops for their actions.  This dude was not cooperating, and he was a threat.  But, even though I didn’t blame them, people sure did.

Then we get to Freddie Gray.  I have no idea what happened during that arrest, but given the charges that seem to be coming down the pipeline, it was effed up.  But then you get the response, which is completely unjustified.  The cops did something wrong, killed someone.  Let’s break everyone’s shit.  This makes no sense.

Now, these are incidents that have increased publicity.  Since Ferguson, we are ultra-sensitive to police brutality.  And we’ve got this movement of people talking about cops like this: 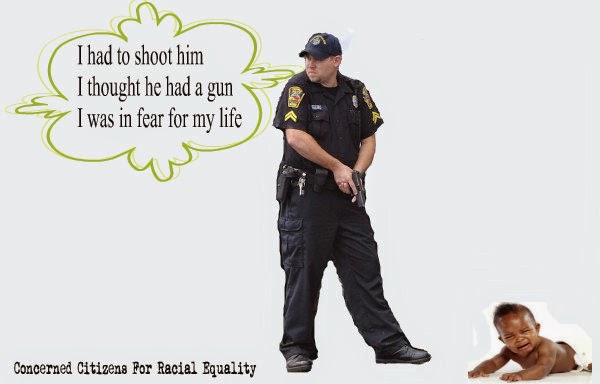 All of which has promoted this idea, this abso-fucking-lutely shit-ass idea, that cop = brutal.  “Police Violence is Business as Usual?”  What the fuck, people?  Do you really believe that?

In the county in which I work, we have just had our 210th fresh felony arrest this year.  That’s a small county, and it’s felonies only, which means it’s not the majority of police contacts (they deal with far more misdemeanors).  None of those, that I’m aware of, have filed any kind of complaint for police brutality.  Business as usual, for the cops I work with, is simply being cops.  The goal of most cops is to do their job, not to be violent for the fun of it.

But wait, Frog, didn’t you say that there were two extremes?

Yup.  For every internet position, there is an equally extreme optimism.  And this one comes from some good ol’ fashioned jingoistic red-white-and-blue bullshit.  It looks like this:

Are you seeing that?  Holy shit, people.  A police state is a safe state.  And in case you think this is a Poe’s Law joke, let’s look at some other memes circulating amongst our far right brethren.  Here’s a common slogan: 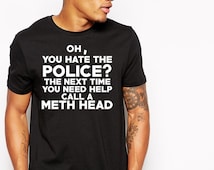 These are the same people, the same fucking people, that talk about how they hate “big government.”  How Americans don’t need government to take care of them, because Americans are good honest people who will take care of each other.  But suggest, hint, at the fact that we may need to watch the watchmen, and apeshit we will go.

But most of them aren’t.  I’ve seen cops go out of their way to help their drug addicts.  I know cops that try to hook kids up with jobs to get them off the streets.  I’ve seen these folks do amazing things, and I know they’re capable of great good as well as great evil.

Back to Sergeant Moore.  He got shot.  He got shot, in part, because of the attitude that presents a confrontation between cops and the public.  Last year, 2014 saw 126 officers give up their lives in the line of duty.  There’s not a lot of solid statistics at how many people police killed, and that area gets even greyer when we start talking about whether those kills were justified.  Fun fact:  some were.  And some were because they thought it was a good idea to stand up to the cops, because after all police are just mindless animals, right?

So, here’s the defense attorney take:  It is good for you to assert your rights.  It is fine for you to remain silent.  But “remain silent” doesn’t mean “tell the cop you are going to whup his bitch-ass.”  It means “shut the fuck up.”  Asserting your rights is a simple, easy process.  Going nuts on a cop is a good way to get hurt.  There’s a chance the cop will beat the shit out of you anyways, but that chance is pretty remote.  I’d play the odds.

As to the rest of us, the ones not in constant confrontation with the cops?  Let’s try to look at each incident as its own thing, each officer as an individual person committing an individual act.  Right or wrong, the entirety of law enforcement should not be judged by their most visibly evil members.  That said, someone should watch the watchmen.