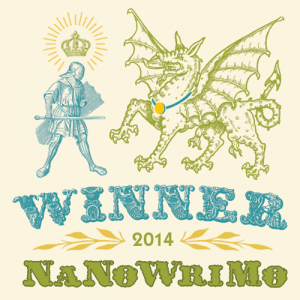 Esther is just behind me in this, but I figured I’d post my thingy to be all thingy now.

So, I won Nano.  And I feel cheesy even saying that.  “Win” is a word that usually refers to a competition.  It implies that I somehow accomplished something.  But as I said in an earlier post, all it means is that I shat out 50,000 words of a novel.  It’s by no means complete; I haven’t even written the final chapters yet.  I don’t have the rough draft of what I would call “a novel,” just most of one.  But still. I win.

When are you going to get to read this novel?  Never, most likely.  It needs burning, and badly.  It’s 50,000 words, and almost all of them are crap.

Nano, I believe, can be a wonderful tool for those who have never completed a novel.  It offers a massive support structure, and a lot of assistance getting through those 50,000 words.  I am sure that, had I participated in Nano before publishing two novels, and before I signed a three-book deal with my publisher, I would have appreciated it for what it is able to do:  teach people that finishing a novel is possible.

That’s really step one to completing the novel.  Ass goes into chair, and typing begins.  And Nano does that, and for that it has value.

But I’m looking at the dreck I produced in my slapdash effort to make it to the end, and I’m realizing that Nano teaches you to complete the novel.  It does not teach you to make the novel worth a damn.  In fact, when the finish line (today) loomed near, I stopped doing any kind of creativity or quality control.  I work a full-time job, and completing Nano on top of that and going to Orycon meant I had to bear the hell down when it came to getting this thing done.  And the result is?  Nothing I would ever care that the public read.

So does Nano have value?  Absolutely.  But it has value for an author at a certain stage of their writing career–namely, the very beginning.  Does Nano have value to me now?  No.  I would go so far as to say that it has a negative impact on my writing now, as I could have been working on something good, but instead I did this.  Will I be participating in Nano 2015?  Hell no.  Been there, done that, got the “winner” logo to post on my blog, was offered the ability to purchase a t-shirt.

I left open the question, at the end of my last Nano post, as to whether or not Nano was a cancer on the indie publishing community.  That question remains open.  I say “cancer,” because I believe the analogy is accurate.  A cancer is a growth that uncontrollably grows, depleting the bodies resources for no function.  My Nano novel, which is still titleless, grew uncontrollably, and uselessly, and took the resources that could have otherwise been devoted to healthy writing pursuits.  I feel like it might be doing the same across the industry.

Still, it has value for beginners.  So if you love doing Nano, then good on you.  Enjoy it.  Post the graphic and call yourself a winner.  I have.  A winner is me.  But I’d prefer to be working on things I can be proud of, instead of being proud of that.