So, this weekend marks the midpoint of November.  It also marks the half-way point on my NaNoWriMo word count.  I’m recovering after Orycon, which set me back in my word count, but I’ve managed to make up ground this weekend.

So far, I’m learning some things from the experience.  I’ll try and condense it down, but there’s a lot of thoughts I have mulling about and I’m going to try to crystallize them here.  Before anyone jumps down my throat about what I’m about to say, I recognize that this is a hot-button issue amongst writers.  There are some who are die-hard fans of the practice, and others who wouldn’t touch it with a ten-foot pole.  NaNo is, undoubtedly, a force in the writing world, and there are many who take advantage of it and ride that wave to help them create something great.  There are many who think it interferes with greatness.

Me, I’m of two minds about it.  So here’s my musings, such as they are.

Positive Things I Have Learned:

1.  I can throw down some serious word count

Twice, now, I have topped 10,000 words in a day.  That’s over three average-length chapters for one of the Gift of Grace books; for my NaNo project, it’s about five chapters.  When I’m on a roll, the dam breaks and the words hit the page.  My word count is quickly approaching the 30k mark, and I have only really devoted two weekends to the pursuit.  By the time my four-day Thanksgiving expires, I will have stuck a fork in this thing easily.

2.  My non-collaborative work is pretty organic

Esther and I are working on two separate projects, and that means I’m free to take these characters and this world and run with it.  My characters pretty consistently surprise me with the crap they pull, and I have absolutely no idea how this whole thing is going to end.  I know it’s going to end in 20,000 words, give or take, but I don’t know how yet.  That’s a little terrifying, but it’s a lot of fun totally pants-ing something.

3.  The less revision you do to yourself in your zero draft, the better

This one I’ve preached many time, and so this is more of a confirmation than anything else.  I’ve said it before, but the absolute best piece of writing advice I’ve ever received is “Put Your Ass In the Chair and Keep Typing.”  I am, in fact, taking this opportunity to coin the following term:  PAIC, for PUT ASS IN CHAIR.

NaNo, by enforcing a word count on me, has actually forced me to PAIC.  I’m not concerned about revisions; if I get to the end of this book, and it’s something that I feel like is worth pursuing, then I’ll go back and polish it.  Right now, I’m shitting out a word count as quickly as I possibly can.  Most of those words will, eventually, need to be changed, but the rough cuts of a story are taking shape very, very quickly.

I’ve been on a couple of teams for writing workshops, now.  This will probably be a blog post all its own, but I want to mention it here.  Twice, now, I’ve critiqued a Chapter One for someone, and in speaking that person have found out that they have ceased roughing out their story to focus on making sure they got Chapter 1 right.  This is pure lunacy, as what you decide to write in Chapter 14 may very well completely change what needs to happen in Chapter 1.  NaNo drives home the need to get your word count in first, revision later, and I really appreciate that because it is absolutely the correct way of doing things.

And now, the not-so-positive observations:

There’s a false sense of completion at the end of NaNo. 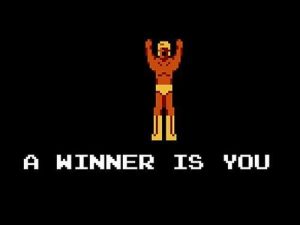 But remember when I said I was just shitting out word count as fast as I could?  I called that a good thing, and it is.  Revisions are pointless until you’ve got the whole thing roughed in, and you know what your story looks like front-to-back.  Getting the whole thing roughed out is absolutely the first step, the thing that enables your revisions to be worth a damn.

But I used the verb “shitting” very intentionally.  Doing this?  It is only step one.

Roughing a story is a hell of a lot more fun than revising it.  Word count is fabulous, really, and driving that word count home feels great.  It feels like you’re doing something.  But it is the most emotionally satisfying and least difficult part of the novel-drafting process.  Revision is an excruciating, tooth-pulling nightmare of a process, and it is absolutely necessary to complete your novel.  We use the terminology from the art of sculpture; “roughing” and “polishing.”  So let’s extend the metaphor a little bit.

Here is your novel at the end of the rough-draft process that NaNo gets you through: 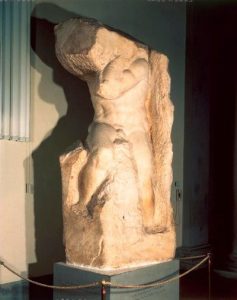 Note, if you will, that while you can basically tell what the statue is going to look like, it is by no means complete.  Michelangelo never finished this thing.  Now, because of that it’s currently worth a lot, but that only works if you get (1) really famous, and (2) dead.  If (God forbid) GRRM eats it before finishing Volume VII of Song of Ice and Fire, you can be damn sure that unfinished draft will be worth something to someone.  But your NaNo project?  Not so much.

Making the rough cuts on a statue is the easy part.  You take a big-ass, heavy chisel, and you get some stone the hell out of the way.  Woo!  The marble chips fly and shit is getting done.

But the art, the true beauty, isn’t achieved that way.  It’s achieved with fine-grained rasps and with pumice and cloth, polishing the stone into a perfect smoothness.  It’s meticulous, painstaking work, and hours can go by without a significant change to the statue as a whole.  But therein lies the true art: 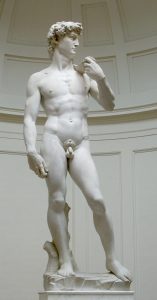 NaNoWriMo stands for National Novel Writing Month, and therein lies the problem.  There is this persistent feeling that, once you’ve got 50,000 words in a file, you have written a novel.  That’s so far from the truth it’s laughable.  Getting a rough draft done is great, but you haven’t written a novel until you’ve actually finished the revisions.  NaNo glorifies the easiest part of writing, and gives a hand-wave to the rest of it.

There is, at least, a hand-wave.  You can “sign a pledge” once you “win” to revise, but there’s no additional kudos given for someone who revises their novel.  No, that’s extra, a bonus.  Revision is treated by NaNo as an afterthought, when it is the real meat and substance about the art.  Can you imagine someone looking at Michelangelo after he’d roughed in a statue and saying “Wow, Mikey.  That’s amazing.  You Win!  We consider this complete.  You can, if you so choose, promise to polish it up a bit, but pretty much we think it’s great that you did this much.”  Of course not.  But that’s what NaNo has essentially done with thousands upon thousands of aspiring authors.  And this leads me to my final, earth-shattering conclusion:

NaNoWriMo may do some good, but is also responsible for a whole bunch of really terrible books on the market today.

Looking back at the time we spent struggling with the Friday Indie Review, it was God-Awful.  There was so much dreck that my eyeballs had to absorb.  Looking back, many of those novels were the products of NaNo.  50,000 words in a month, followed by a hand-wave at revision, and then a jump straight into publication.  Is it any wonder that they stank with the perfume of a thousand maggot-infested corpses?  Hell no.  I’m looking at what I’ve thrown on a page so far this month, and I’m not even willing to share the basic plot outline here.  It’s not very good, at the moment.  I would be ashamed to let it see the light of day in its current state.  And I’m pretty sure mine’s one of the better ones.

So I write this blog post.  Maybe, when I get to the end of the process, I’ll have some further revelations.  I see a lot of good coming from NaNo, but I also think there’s a chance it might be a cancer on the indie book industry.  The jury is still out on that one.